Find out more about The Gigabit Difference in the latest edition of Spotlight Magazine.

There has been a subtle shift in how internet service providers (ISPs) advertise their broadband products over the last few years. Not long ago, the most you could expect from your VDSL product that was advertised at 80Mbps, was around 76Mbps. Now however, more than half of UK homes are now within reach of a gigabit connection.

Today, in more progressive markets, and thanks to emerging regulations and advertising standards, ISPs are starting to advertise speeds their customers can actually receive. The knock-on effect of this has not only impacted the way ISPs advertise their ultra-fast products, but also how they deliver them, particularly at the boundary of 1Gbps. But although so many homes are within reach of a gigabit connection, a much smaller proportion are actually connecting at those speeds.

In this article, we’re exploring why this is - but first, here’s a quick recap about how network interfaces operate and how ISPs advertise their speeds.

How do network interfaces operate?

Network interfaces, both wired and wireless, have a physical link speed that cannot be exceeded. For example, a 100Mbps network interface can send and receive at 100Mbps at most. This is a fundamental electrical limitation of the interface. Wi-Fi operates similarly, except it will automatically vary its link speed according to the radio conditions. For the purposes of this article, we will focus largely on wired network connections, as these are generally accepted to be faster and more reliable for carrying out performance measurements.

Data transmitted over networks is broken into packets. Each packet contains a header that describes where the packet is from, where it’s going to, what port it’s destined for, and much more. In fact, each packet tends to have multiple headers; in a wired network you would often see an Ethernet header, an IP header, and a TCP or UDP header.

In a wired Ethernet network, a packet will typically be 1500 bytes long and headers will consume 60 bytes of that (assuming it’s a TCP packet). This equates to 4% and is commonly referred to as “packet overheads”.

This also gives rise to the two different terms that we use when talking about network speeds:

The provisioned link speed that your device is connected at. For example, a 100Mbps Wired Ethernet connection has a link speed of 100Mbps, which cannot be exceeded.

The maximum speed that the application running on your device can send and receive data, taking into account packet overheads. For example, an application using TCP on a 100Mbps Wired Ethernet connection would have a maximum application layer speed of around 96Mbps (assuming 4% for packet overheads).

Additionally, when service providers come onto the scene, there is also the “advertised speed”, which consumers are told they will receive. This may be the link speed, application layer speed, or something else entirely!

So, how does this all historically relate to service providers and their advertising?

How do service providers advertise their speeds?

ISP-provided internet connections are also subject to packet overheads. It doesn't matter whether your connection uses DSL, fibre, or cable - these are just different physical interfaces. So, if you have a VDSL connection with an 80Mbps link speed going directly into your home, your best-case application layer speed would be a little over 76Mbps.

Almost all speed tests operate at the application layer, including the SamKnows QoS tests and common web-based and app-based speed tests from other network performance companies. This created a problem for ISPs, as non-technical consumers would run a speed test on their newly purchased "80Mbps" connection and receive around 76Mbps at most. The cause isn't easy to explain over a support call, and advertising bodies began to receive complaints about false advertising.

To remedy this, ISPs in many countries changed their advertising to refer to the maximum application layer speed, which resulted in some advertised speeds falling slightly (i.e. from 80Mbps down to 76Mbps).

Some ISPs solve the problem in a different way. Rather than reduce their advertised speed, they increase the link speed beyond their advertised rate. This is a process known as "overprovisioning". For example, a cable operator may provision their 100Mbps advertised product at 115Mbps - allowing for 15% overheads. In doing so, the consumer will still see speed test results at, or even slightly above, 100Mbps.

There’s nothing wrong with this practice - after all, it effectively gives customers additional bandwidth for free. It's also regularly used by ISPs across all access technologies but has become more commonplace in the past few years.

Things start to get a little more complicated when we talk about 1Gbps speeds. This is because many routers will have a WAN interface with a physical 1Gbps limit, meaning you cannot overprovision the entire service to 1.15Gbps. Your physical 1Gbps limit means that users will see speed test results of around 940Mbps. As a result, many service providers advertised their ultra-fast products at 940Mbps instead of 1Gbps.

Of course, 940Mbps doesn’t sound as fast as 1Gbps from a marketing perspective. So many ISPs are now overprovisioning here too, where the access technology allows for it. In the cable world, DOCSIS 3.1 allows for link speeds in excess of 1Gbps. In the FTTH space, there are 2.5Gbps, 5Gbps, and 10Gbps physical interfaces available. And in both the cable and FTTH space, it’s now quite common to see broadband products provisioned with a 1.15Gbps link speed and once again being advertised as 1Gbps.

So is all well with the world? Not quite.

With ISPs now over-provisioning their 1Gbps products, you might expect people to run speed tests in their browsers and see results of 1Gbps. But this is not the case. The internet access speed has now outstripped the speed of the equipment in the home.

First and foremost we have the home modem/router. Whilst the link speed into the WAN interface of the router may be 1.15Gbps, almost all routers on the market only have wired LAN interfaces with link speeds of 1Gbps. This means that a single device connected to the router's 1Gbps LAN port would still only be able to get 940Mbps in a speed test (which operates at the application layer), regardless of what the WAN speed is. It still looks as though it will be another couple of years until 10Gbps LAN interfaces become commonplace for consumer equipment. Until this happens, ISPs and consumers are presented with a shared issue: consumers have no way to verify that they are receiving the service they are paying for, creating a support burden for ISPs. Service providers are acutely aware of this issue as it’s a return to the original situation where they’re selling a product that cannot be achieved by a web-based or app-based speed test.

You may also ask about Wi-Fi at this point, but realistically you're unlikely to reach anything near to 1Gbps using the current generation Wi-Fi technologies unless you're in a lab environment. 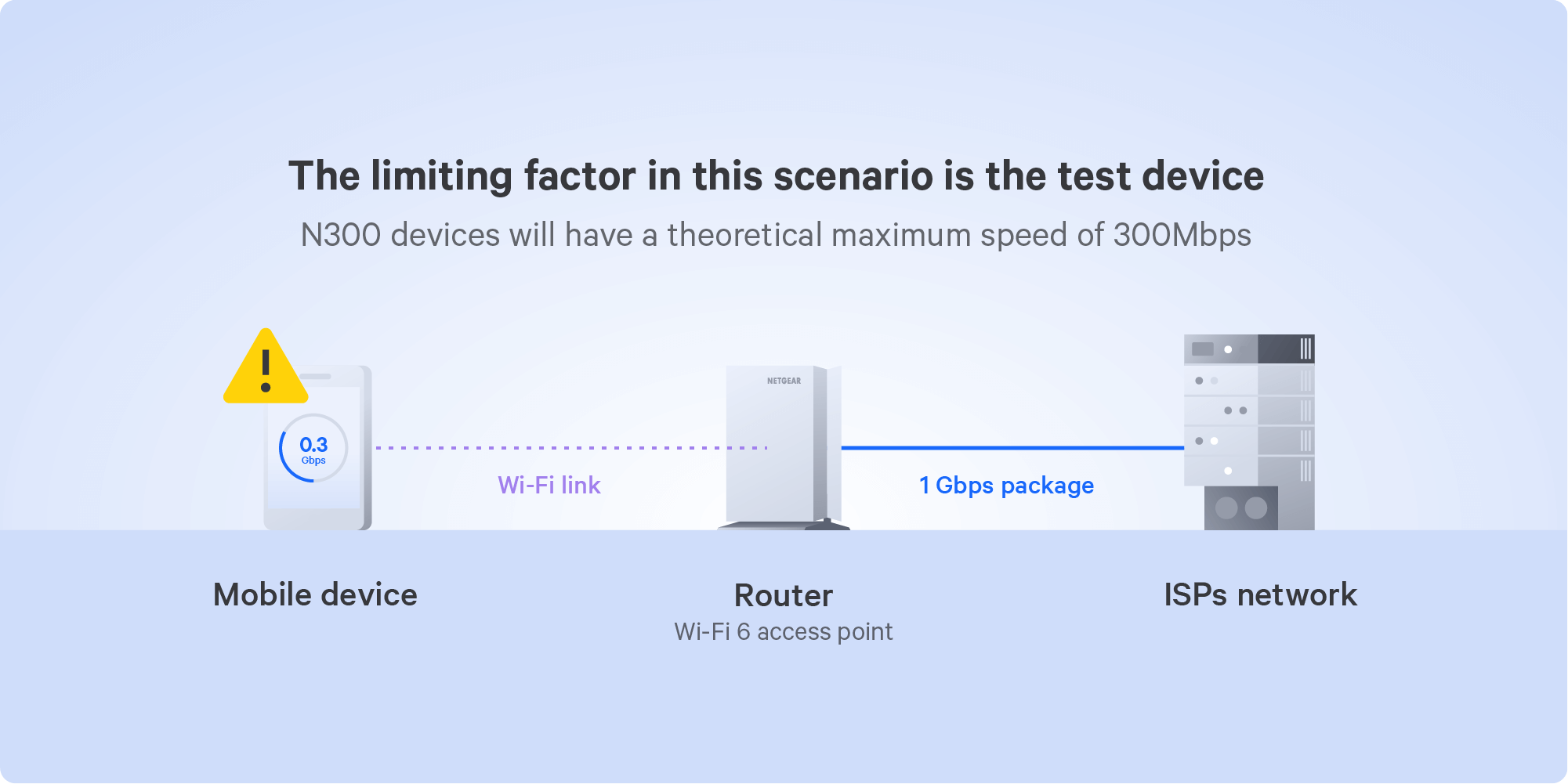 Network speeds are constrained by the lowest common denominator and in this case, both the user's wired devices and the router almost exclusively operate using 1Gbps ports. Wi-Fi is too unreliable at very high speeds, so it is going to be a while before this is resolved. 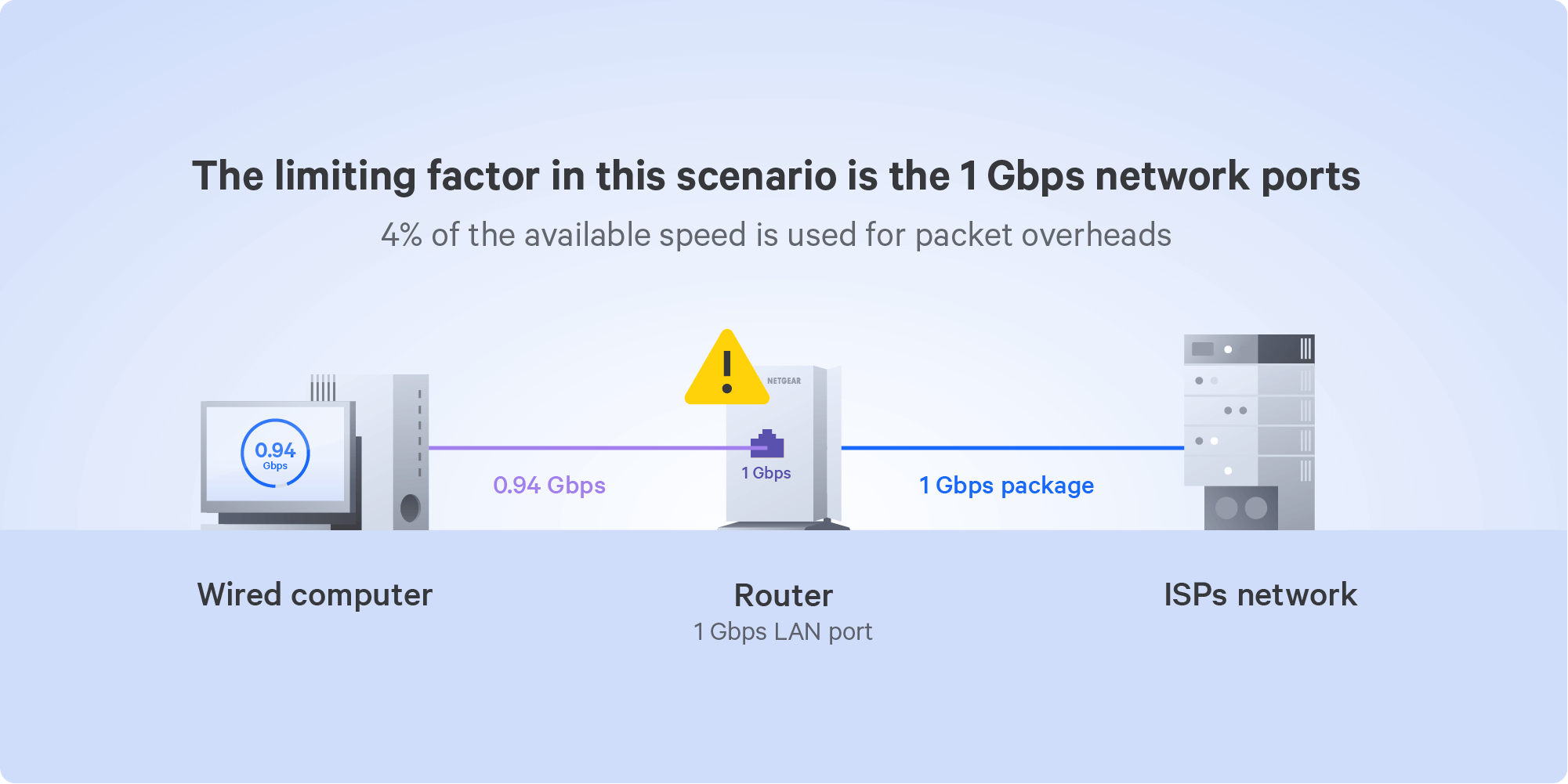 Some ISPs bake into their product description that users need to use multiple devices simultaneously in order to reach the full speed. For example, this text from Bell regarding their 1.5Gbps FTTH product says:

Such an approach is effective, as it means that the customer will be able to saturate their 1.5Gbps link if they follow the advice. However, it still doesn’t allow a customer to confirm that they’re getting what they pay for with a browser or app-based speed test.

How SamKnows can help

At SamKnows, we have developed effective solutions for service providers that allow you to prove to your customers that you’re delivering the full 1.15Gbps to their home, meaning your customers can get the full 1Gbps at the application layer. The most effective way of doing this is to embed the SamKnows measurement functionality directly inside your routers, which you can do via the SamKnows Router SDK.

Software operating inside the router is unconstrained by the 1Gbps LAN ports, and has direct access to the 1.15Gbps WAN port. This means we can measure a 1Gbps speed at the application layer. In fact, SamKnows' hardware accelerated measurements, operating on compatible Broadcom and Qualcomm chipsets, allow speeds in excess of 1.5Gbps to be measured on modest hardware. 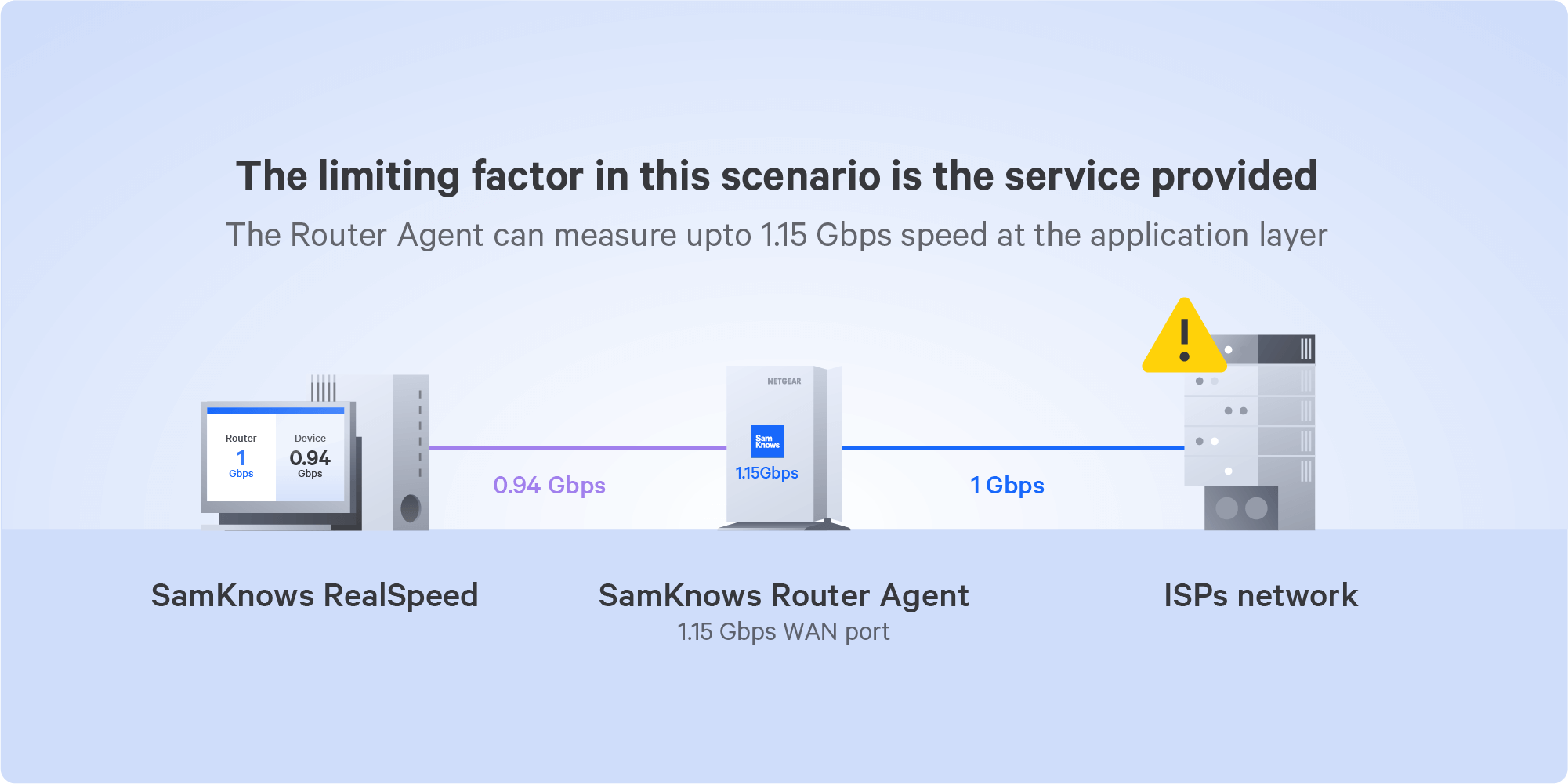 Eventually, 10Gbps Ethernet interfaces will fall in price, and routers with 10Gbps ports will become more commonplace. And again, this will allow you to reach the full speed when testing from a single device. But 10Gbps ports are still looking like a couple of years away, and of course, the problem could move elsewhere when they become available (i.e. web browsers currently struggling to measure over around 5Gbps, even on modern hardware).

The SamKnows Router SDK allows service providers to embed SamKnows measurements directly inside your fleet of routers, and measure performance in excess of 1Gbps for tens of millions of homes. You can then use the results to demonstrate that you’re delivering on your promises.