Broadband has entered the gigabit era. More than half of UK homes are now within reach of a gigabit connection, for example, even if a much smaller proportion are actually connecting at those speeds.

One reason many may not have upgraded to those blistering download speeds – aside from the cost – is that they simply don’t know what to do with it. Even the boss of one of Britain’s most respected broadband providers, Zen Internet, told us that he believes that nobody really needs gigabit broadband. At least, not yet.

So what difference does a gigabit-grade connection make to people’s broadband experience? What impact does it have on their data consumption and speed around the home? And what might they be able to do with those speeds in the future? We’re going to explore all those questions with some of Britain’s best-known broadband providers and SamKnows’ own experts. 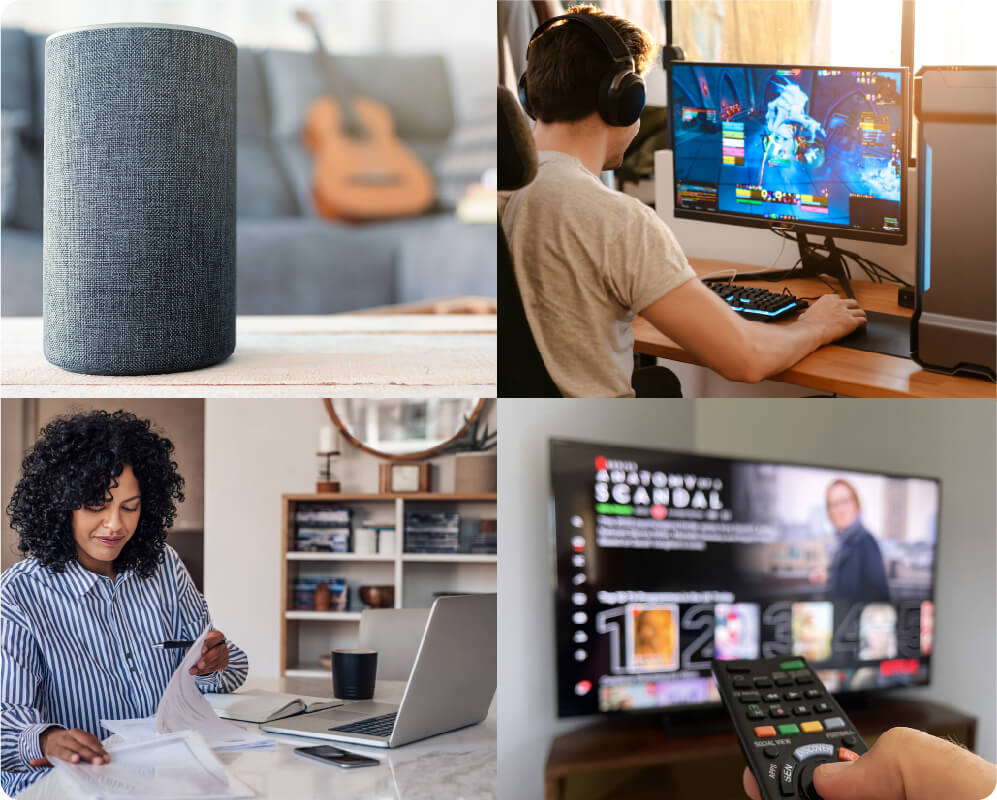 One thing is clear from the data shared with us by the broadband providers: those on gigabit connections do consume a lot more data.

Jeff Dodds, Chief Operating Officer at Virgin Media O2, revealed that customers on Virgin’s gigabit connections download 2.3 times more data than those on the company’s entry-level tier, which is 100Mbits/sec.

The CEO of Zen Internet, Richard Tang, shares similar data. Zen customers on up to 40Mbits/sec fibre-to-the- cabinet connections download on average 250GB of data per month. That average climbs to 950GB for customers on a gigabit line, which is getting on four times as much data.

What accounts for that big hike in data consumption? Do people with faster connections simply download more content because they have the speeds to do so? Or are the faster connections generally found in bigger households, where more people are putting demands on the line? The broadband providers believe it’s a mixture of the two.

“I think that heavier users are naturally attracted to the bigger bandwidths,” said Richard Tang. “Alongside that, getting gigabit connectivity into your home these days is quite cost-effective. Some people just think ‘I’ll have a gigabit because I can have a gigabit, and it’s another fiver or another tenner, but I want the best and so I’ll have the best’.” 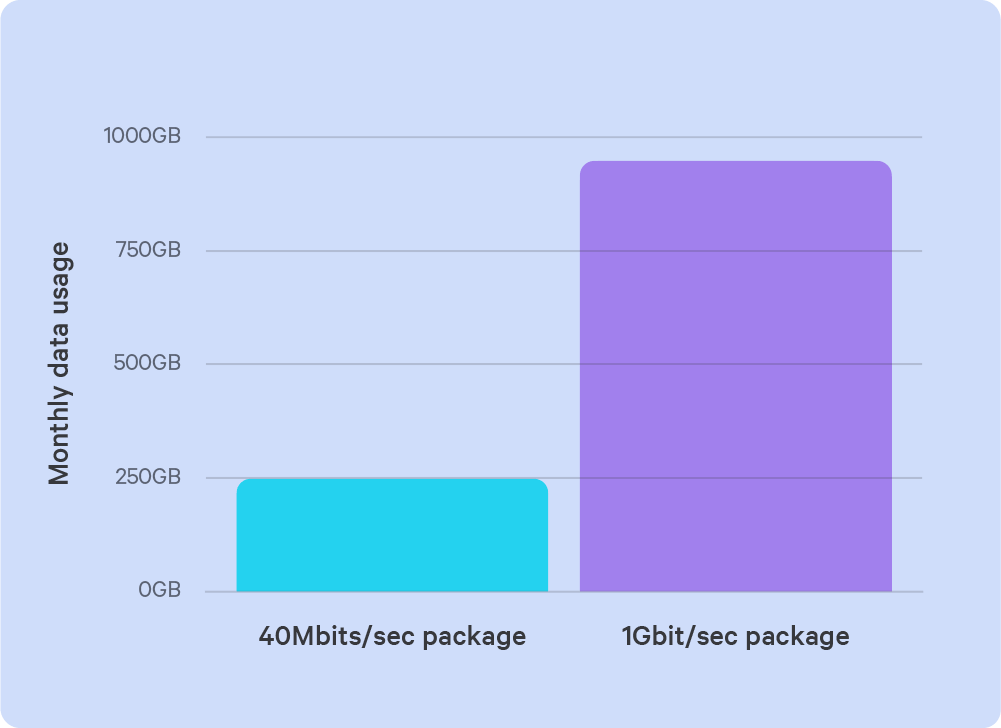 Virgin’s Jeff Dodds agrees that “there are a large group of people who just want to pay for the best”, but there are also an increasing number of home scenarios where having that amount of bandwidth on tap is necessary.

He outlines a setting where a family home has IPTV security cameras, TVs streaming 4K content in different rooms, kids playing online games on their consoles, and parents working from home. “Will I use the full gig at any given time? Maybe not,” he said. “But I’ll get pretty bloody close to it.”

Will I use the full gig at any given time? Maybe not, but I’ll get pretty bloody close to it.

Richard Tang believes we’re at a point where the speed on tap is largely outpacing demand. “We’ve got this
jump in technology, and the technology is way ahead of usage at the moment,” he said. “The reality is nobody actually needs a gigabit. Despite what the government might say, no-one needs it today. They’ll need it in the future at some point; but today, what can you do with a gig?”

However, the benefits of gigabit connections are not only limited to the raw download speed, as SamKnows’ own data reveals. A shift to gigabit often means a shift to an end-to-end fibre connection, and that delivers other benefits, according to Sam Crawford.

“Our metrics have shown that in general, full fibre connections deliver lower latency, lower packet loss and more reliability than the alternatives,” explained Sam. “Whether it’s a copper pair of the sort used for DSL- based services, or coaxial, as provided by DOCSIS or cable services, fibre is definitely the most reliable.” 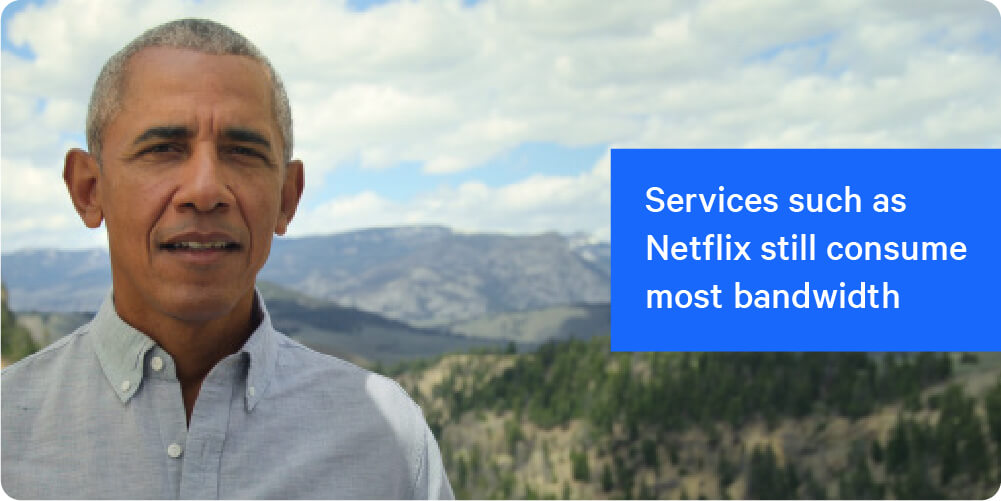 Although, as Sam points out, you don’t necessarily need to be on the fastest speed tiers to reap such benefits. “I just want to stress that you don’t have to go to gigabit to get that,” he said. “If somebody is offering you 50Mbits/sec or 100Mbits/ sec fibre-to-the-home, and you want that extra reliability or consistency, then you can get it on that lower speed and lower price point.”

What are the people who do pay for the gigabit doing with all that bandwidth? Watching a lot of video, it seems. Streaming accounts for the vast majority of bandwidth consumption, with gigabit connections allowing users to watch multiple 4K streams simultaneously (provided their Wi-Fi equipment is up to the job, which we’ll come to shortly).

There are emerging applications, such as games streaming, which “is chewing up bigger chunks of bandwidth, but it’s still quite small compared with mainstream video streaming, and then all of the other applications pale into insignificance,” said Tang. The ISPs will see occasional spikes when large updates are released for popular games such as Fortnite, or Apple releases a software upgrade for iPhones, but they’re blips on the radar rather than the constant demand of video streaming.

That increased data consumption as people move up the speed tiers does create challenges for broadband providers – and those challenges have increased significantly over the past couple of years, with the pandemic confining more people to their homes. ISPs are constantly having to upgrade their infrastructure to meet demand. “It’s like painting the Forth Bridge,” said Richard Tang. “We’re in a continual state of upgrading.”

“In a way, that’s been true for the past 26.5 years; but in the past two years, in particular, that’s just accelerated.

Upgrades we put into the network that we thought would see us through for another year or two are actually only good for another six months. We’ve got to be planning the next upgrade, whether that’s to our core network or links out to peering or transit. We’ve got a big team of people who are continually upgrading
the network.”

It’s like painting the Forth Bridge. We’re in a continual state of upgrading.

Home users might struggle to max out a gigabit connection, but that’s probably just as well – because the majority of equipment in people’s homes simply isn’t capable of conveying those speeds in the first place.

Let’s start with the router. Whilst most routers will be fitted with Gigabit Ethernet ports that would deliver almost a full gigabit of speed to devices (see Mind the gigabit gap box), it’s a different story when it comes to Wi-Fi. The vast majority of routers in people’s homes simply aren’t capable of delivering gigabit speeds wirelessly. Even the latest Wi-Fi 6 models would struggle.

“Let’s say you’re sat in the same room as your Wi-Fi 6 wireless router, and you’re on a laptop that’s Wi-Fi 6-capable,” said Sam Crawford. “You’ll be very lucky to get a gigabit between your laptop and your wireless router. You’ll be at the very limits of what is possible.”

Both Virgin Media and Zen acknowledge that Wi-Fi is becoming a choke point. Virgin’s Jeff Dodds says the company is rolling out new Wi-Fi 6 routers and offers customers extenders that can help the Wi-Fi signal reach remote parts of the home. “We’ve been obsessed with making sure that what you get is the best possible speed you can around the home,” he said. 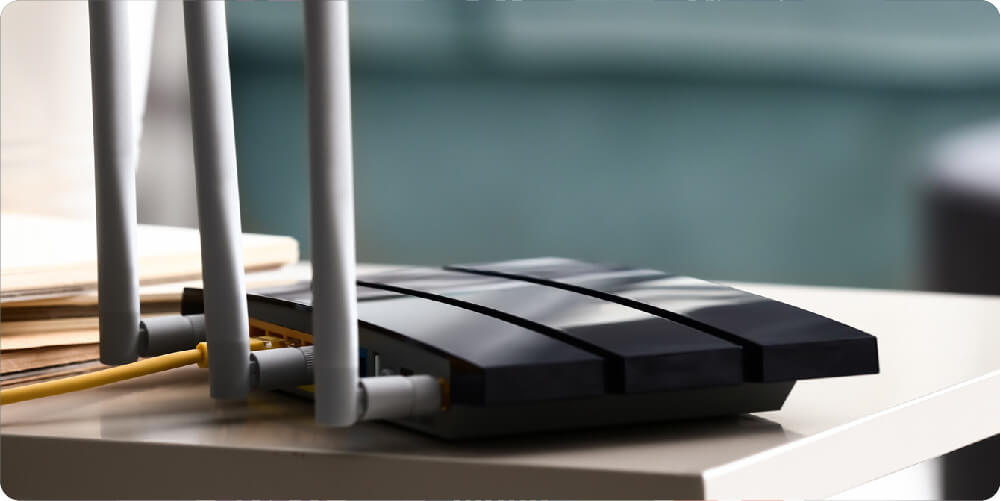 Even Wi-Fi 6 routers can struggle with gigabit speeds

Indeed, Virgin Media is one of the broadband providers that uses SamKnows RealSpeed monitoring technology to help its customers understand how much of the speed that is coming into their home is reaching devices in various parts of the house, over the Wi-Fi connection.

Zen, too, is investing in new Wi-Fi 6 router equipment, but even on the older routers, Tang believes most customers wouldn’t suffer any real harm. He said the 450Mbits/sec throughput that Wi-Fi 5 can deliver “is probably about 20 times the bandwidth of a 4K video stream. So, yes, it’s theoretically a bottleneck [on a gigabit connection], but I can’t imagine it being a bottleneck even in a big house with lots of TVs, lots of Internet of Things devices.”

I can’t imagine it [the router] being a bottleneck even in a big house with lots of TVs and Internet of Things devices.

The first thing a customer upgrading to a gigabit connection is likely to do is run a speed test to see their four-digit download speed. Chances are, they’re going to be disappointed.

Even if the ISP is delivering a gigabit or more into the home, and even if the customer is running the speed test on a computer connected to the router via a Gigabit Ethernet port, the speed test will cap out at around 940Mbits/sec.

Why? It boils down to packet overheads. On a wired Ethernet network, a packet will typically be 1,500 bytes long and packet headers will consume 60 bytes of that (assuming it’s a TCP packet). This equates to 4% and is commonly referred to as “packet overheads”. This means that a single device connected to the router’s Gigabit LAN port would still get only 940Mbits/sec in a speed test, even if the line was over-provisioned (for instance, the ISP delivered in excess of gigabit speeds). 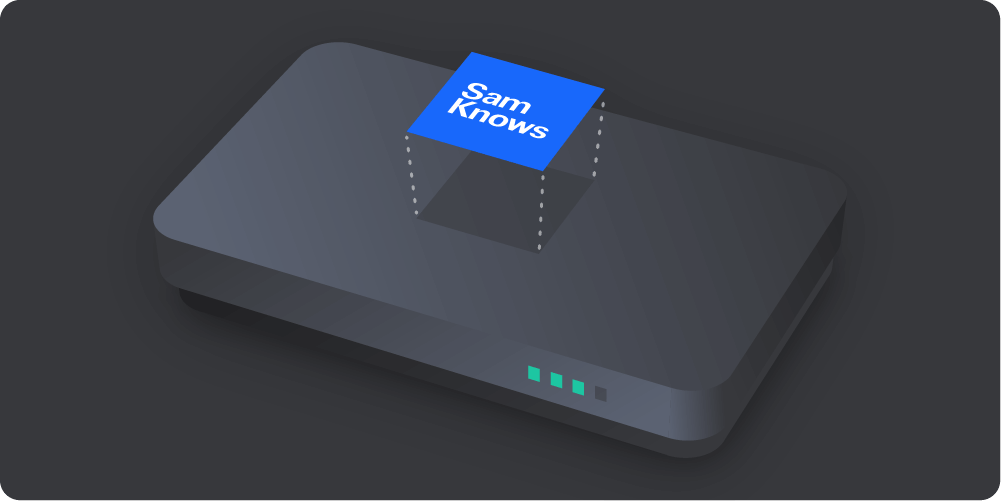 SamKnows has developed effective solutions for service providers that can show customers that you’re delivering the full 1.15Gbits/ sec to their home, meaning your customers can get the full gigabit speed at the application layer. Find out more about embedding the SamKnows Router SDK.

With gigabit connection customers facing a genuine struggle to use up all their available bandwidth, even at peak times, what lies ahead for the broadband industry?

Will the endless drive to deliver faster and faster downloads speeds dissipate? Or will the industry continue to deliver even faster connectivity and hope something comes along to make use of it?

Sam Crawford thinks the focus on download speeds will switch to other metrics. “Speed is definitely becoming less important,” he said, adding that the reliability of the connection is now more critical for customers, especially those working from home. “If there is a 10-minute outage in the middle of the day, or there’s a period of volatility for a few hours where everything slows down massively or is unavailable, then that might not have affected us previously; but, nowadays, we really notice that and it’s really frustrating.”

However, this doesn’t mean that broadband providers will stop cranking up the speeds they deliver to consumers. In the US, AT&T is delivering 5Gbits/sec connections in some locations, with Google Fiber and Comcast also going beyond a gig. In Canada, Bell has a 1.5Gbits/sec plan.

Richard Tang says the 2020s will be “the decade of full fibre,” and that has huge implications for the future of networks. “It’s going to be the last [broadband] technology transition in our lifetimes, because, with all the previous technologies, they built the broadband service on the back of your old phone line,” said Tang. 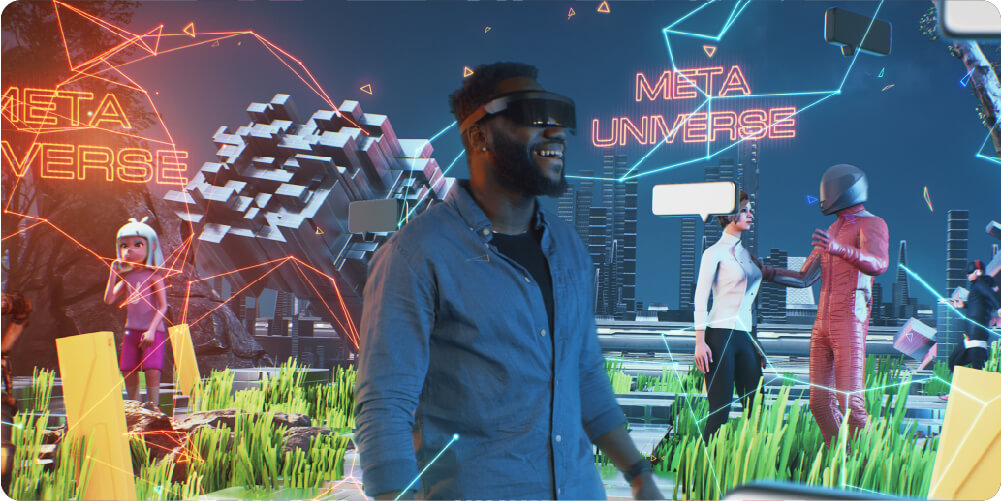 The metaverse could chew through bandwidth

Virgin Media’s Jeff Dodds agrees, and he isn’t the least bit worried about finding applications that will use that bandwidth. Build it and they will come. “Whether it will be something related to the metaverse, we don’t know, but it’s only by having that bandwidth and that speed available that we will find out. Having that capability triggers interesting and exciting new opportunities and industries.”

It’s going to be the last [broadband] technology transition in our lifetimes.

Go into greater depth with our SamKnows and industry experts

Zen Internet is one of the UK’s few remaining independent broadband providers – and one of the most respected. Richard explains which apps consume the most bandwidth, why access speeds are outpacing technology, and the 5G myths.

Sam draws on SamKnows’ exclusive data to reveal why gigabit-grade connections deliver more than download speed benefits. Plus, he explains why Wi-Fi is becoming a bottleneck in the home and why speed is becoming less critical to consumers.