The RealSpeed test shows a simple side by side comparison of the speed at the router compared to the speed on a device inside the home. It was designed to visualize the number one problem broadband customers experience and the greatest headache for ISPs, performance bottlenecks within the home.

Internet performance is not uniform around the home

New ultra-fast fibre broadband packages provide download speeds which are beyond the capacity of Wi-Fi technology to deliver or beyond the hardware throughput limitations of internet enabled devices. The Wi-Fi industry has developed a product class system which applies to the broadband router and the client (device). The available throughput while running a speed test is only as good as the weakest link, so a N300 device will have a theoretical maximum speed of 300Mbps, even if it’s connected to a router capable of 1Gbps. If the device is in an area of the home with poor Wi-Fi signal strength or interference, the performance could be much lower.

Device limitations and the performance impact of poor Wi-Fi signal strength are the most common problems broadband customers face. Including RealSpeed data in public reports can help start the conversation and educate citizens.

Adding RealSpeed to your national study

Wi-Fi is the most popular method of connecting internet enabled devices inside the home. New Wi-Fi standards promise extra speed at the expense of less coverage and penetration through solid walls. It’s not widely understood that the available speed at your router isn’t the same as the available speed on your device. Adding a link to RealSpeed on your project website will help educate volunteers and troubleshoot common in-home problems. 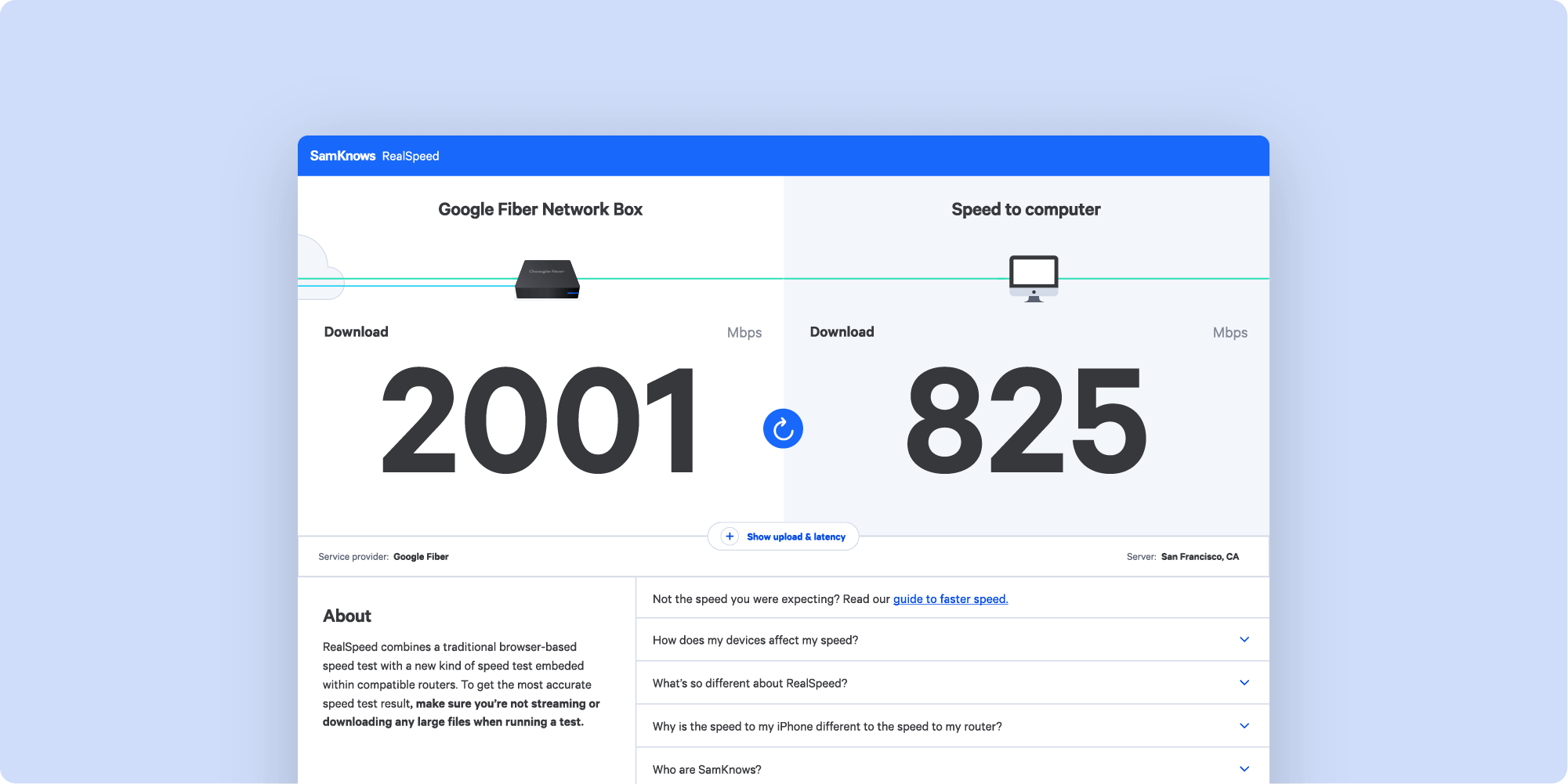 If a SamKnows enabled router is detected, Realspeed will start testing automatically. Two sequential tests, the first from the router to an off-net test server, the second from the user's device over the home network and out to the test server. By comparing the two results you can calculate how much performance is lost within the home, this can be useful for troubleshooting and optimising home Wi-Fi. If the measured speed looks like it’s been restricted by hardware limitations, the user is informed.

ISPs are increasingly making advertising claims about their Wi-Fi performance inside customers homes such as whole-home Wi-Fi guarantees and signal strength comparisons against their competitors. Our RealSpeed test data will allow regulators to audit ISPs against these claims to make sure the public has neutral and fair information available to allow them to make better-informed purchasing decisions.

RealSpeed is ready to deploy in your national studies

To learn more, check out the RealSpeed Factsheet, or get in touch below.