Do you think you’d notice if your broadband connection was consistently delivering only a tenth of its promised speed? Don’t be so sure if you immediately answered ‘yes’.

When we showed one customer that he was regularly getting only 10% of his promised download speed when watching Netflix, his response was one of baffled amusement. “I’m slightly confused,” he said. “I haven’t had any problems with Netflix.”

It was the same story with another customer, who was often getting less than a tenth of his headline connection speed with Netflix. “We haven’t really noticed any huge drop-off in performance when we're watching Netflix," he said – and he was on the Ultra HD plan with a young family often watching streams simultaneously.

Thanks to Netflix’s ingenious means of squeezing even Ultra HD streams down connections of 10 Mbps or less, customers might not notice that their broadband provider is short-changing them.

And when they run a regular speed test and see that they’re getting full speed, why would they ever suspect anything is amiss?

Welcome to the broadband reality gap: the difference between the speeds customers are told they’re getting and what they’re actually getting when using real-world applications.

When SamKnows showed one customer evidence that he was only getting 10% of his promised speed, he was baffled 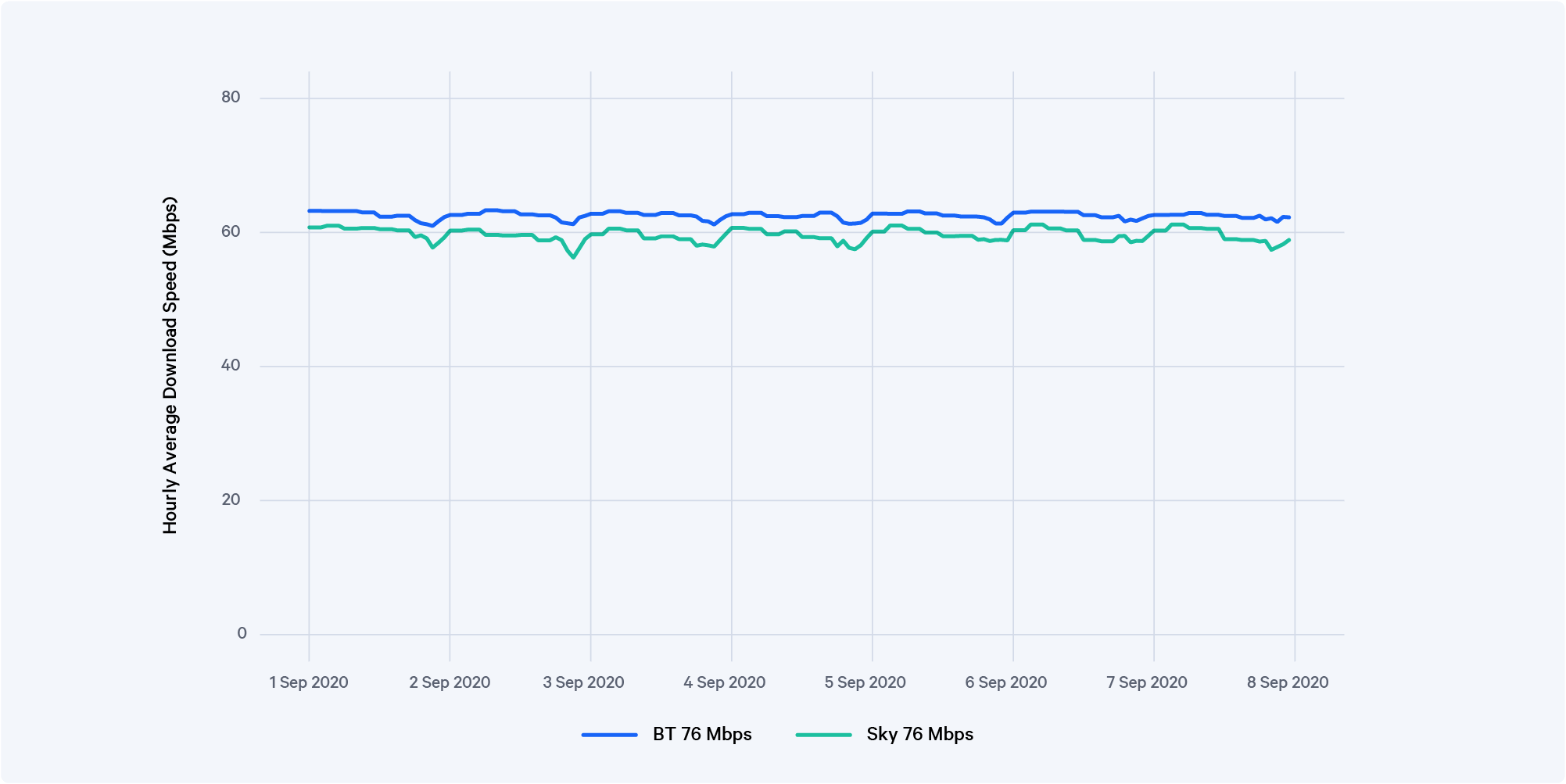 Let’s look deeper into the case of one of the customers above, who’s actually getting much slower speeds than he thinks he is when using Netflix. This is a more common problem than you might realise, with customers of some of the UK’s biggest broadband providers regularly getting Netflix download speeds that are nowhere near the full speed of their connection.

Take a look at the graphs in figure 1, for example, which plot the regular download speeds measured from thousands of customers of BT Broadband and Sky.

As you can see, the average performance of both providers is relatively similar, with the speeds delivered dipping slightly during peak hours, as you’d expect. 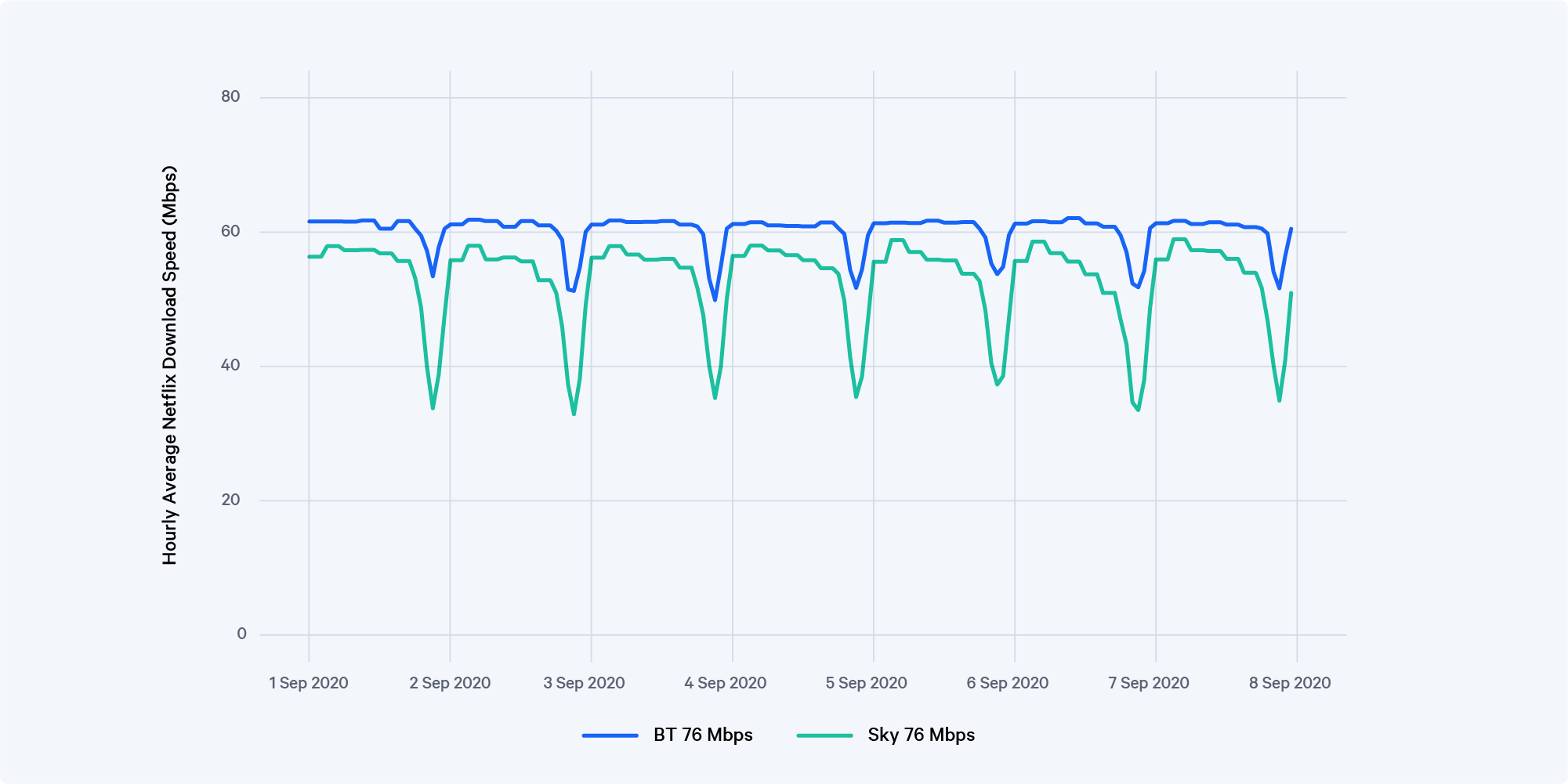 Now take a look at the graphs in figure 2 – the average Netflix download speed from those same two broadband providers on the same days as before. This time the difference between the two providers is far more pronounced. While BT delivers a relatively high and consistent download performance, dipping down slightly during those evening peaks when millions of customers are binge-watching the latest series, Sky’s peak-time drop-off is much greater. Those evening peak hours turn into deep valleys in the speed graph, with average download speeds tumbling by as much as a third.

The Netflix speeds are a rollercoaster, holding up well off-peak, but plummeting during peak viewing hours 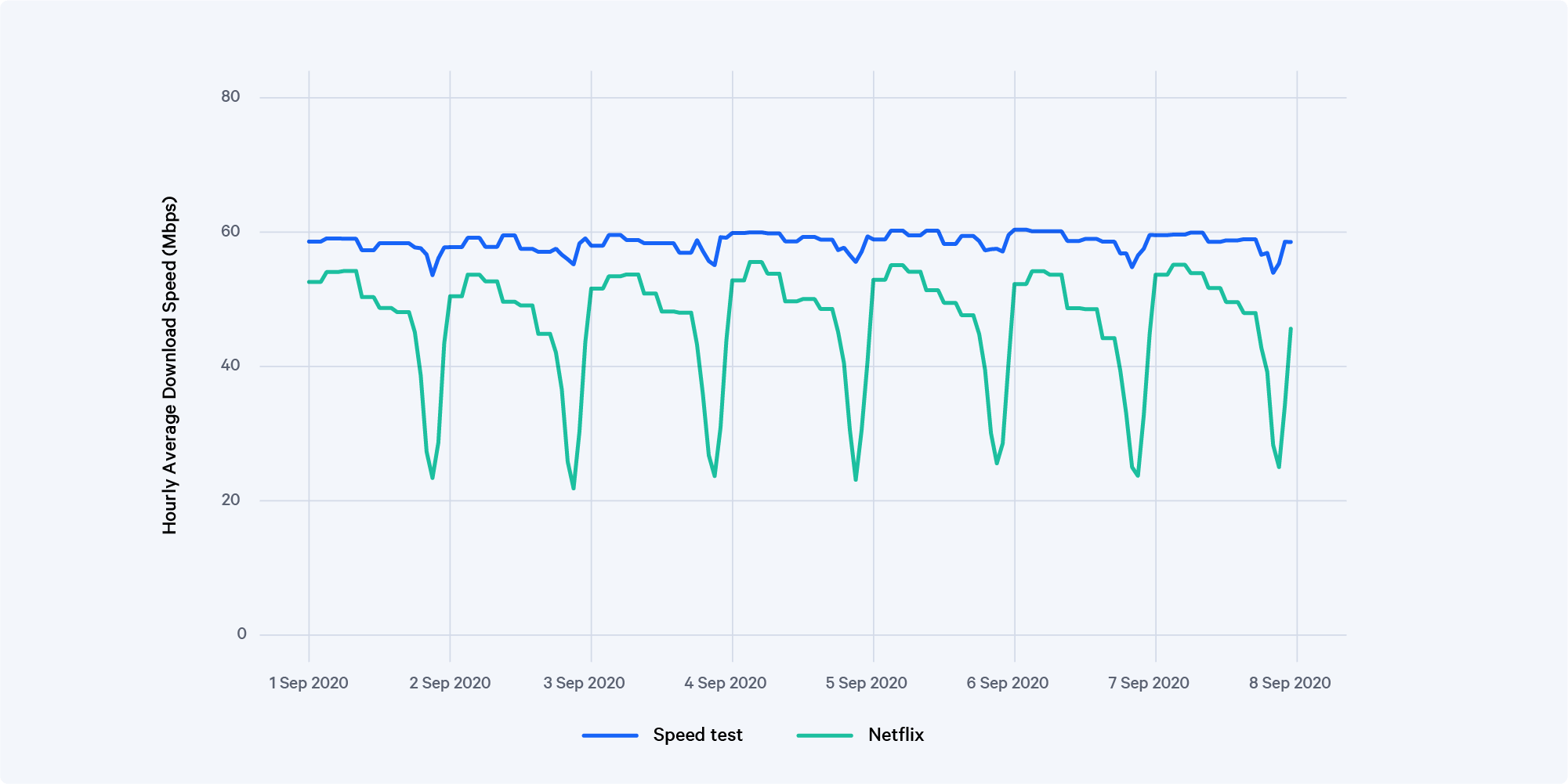 Still, you might be looking at that graph and thinking this isn’t a big problem. Even at its worst, an average speed of 24 Mbps is plenty for two or even three simultaneous Netflix streams within a household. But remember, they’re average figures. 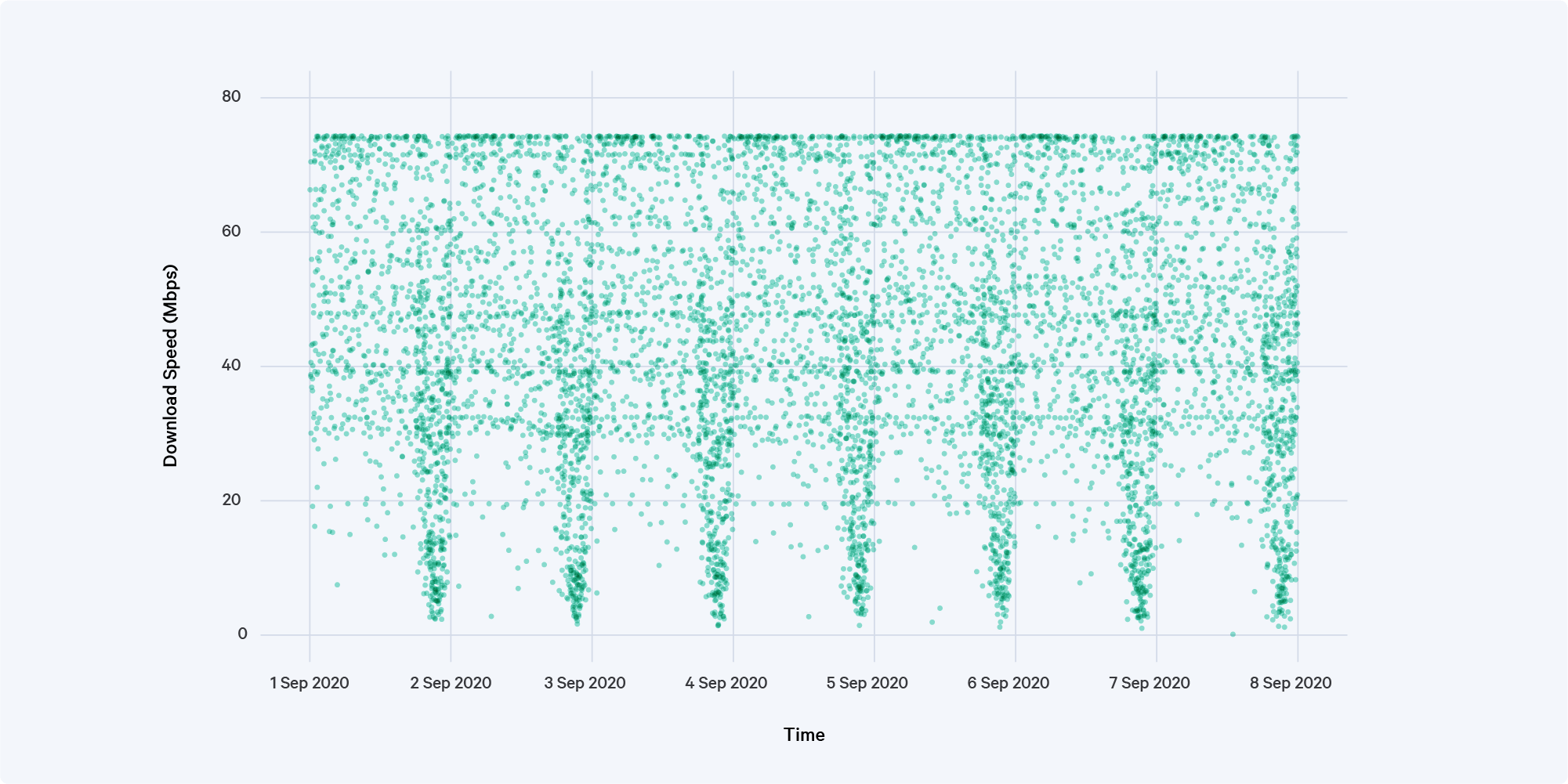 Now look at figure 4, which plots the connection speeds measured from hundreds of Vodafone connections. Many are up in the 50s, 60s or 70s of Mbps, dragging that average speed up. But many are also recording peak- time speeds of less than 10 Mbps. Some are seeing speeds under which you’d struggle to maintain a single HD stream. That 72 Mbps fibre connection suddenly doesn’t look as fast as you might think.

What’s going on here? Why does a connection that appears to run at close to full speed normally struggle with the world’s biggest streaming service?

Let’s be clear that the major broadband providers often go to some lengths to ensure customers get the smoothest streaming experience possible from major services such as Netflix. Providers such as BT, Sky and Vodafone will have dedicated Netflix servers in their data centres that cache the most popular Netflix shows, so that the data has less distance to travel than it would if everything was streamed from Netflix’s own data centres.

Yet, despite pushing the content closer to the customer, the SamKnows data – recorded from millions of actual customer connections – shows that peak- time Netflix speeds plummet. 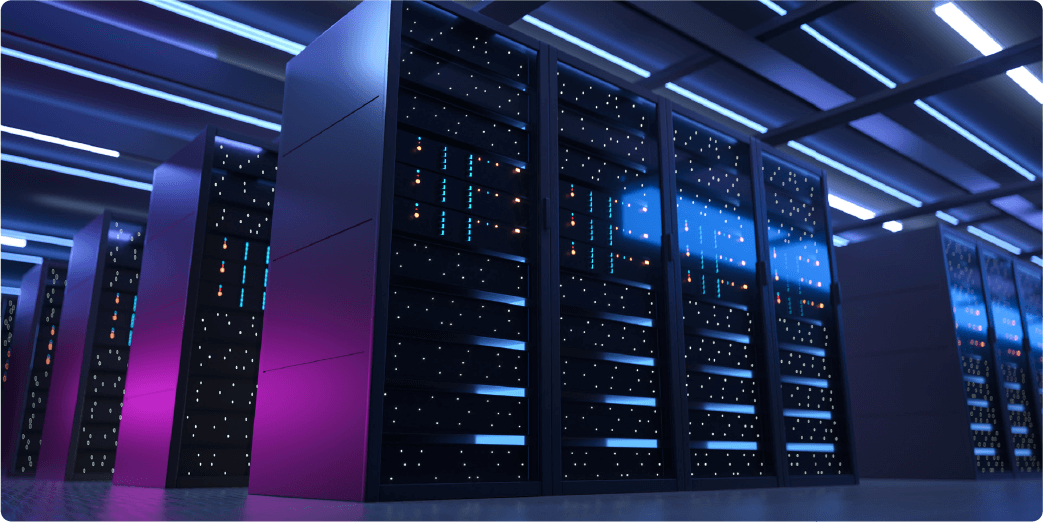 Speed tests may say they have a solid 70 Mbps connection, but they can’t stream 30 seconds of The Crown without buffering

One of the first things someone who encounters such a problem with Netflix streams might do is use an internet speed checker to test for a fault on their connection. Chances are, those internet speed tests would report that everything was fine. The customer would then spend a fruitless few hours checking home Wi-Fi equipment, or stuck on support lines, trying to figure out the reasons a speed test says they have a solid 70 Mbps connection, but they can’t stream more than 30 seconds of The Crown or The Queen’s Gambit before the video starts buffering.

So why would an ordinary internet speed test not pick up the ‘Netflix problem?’ 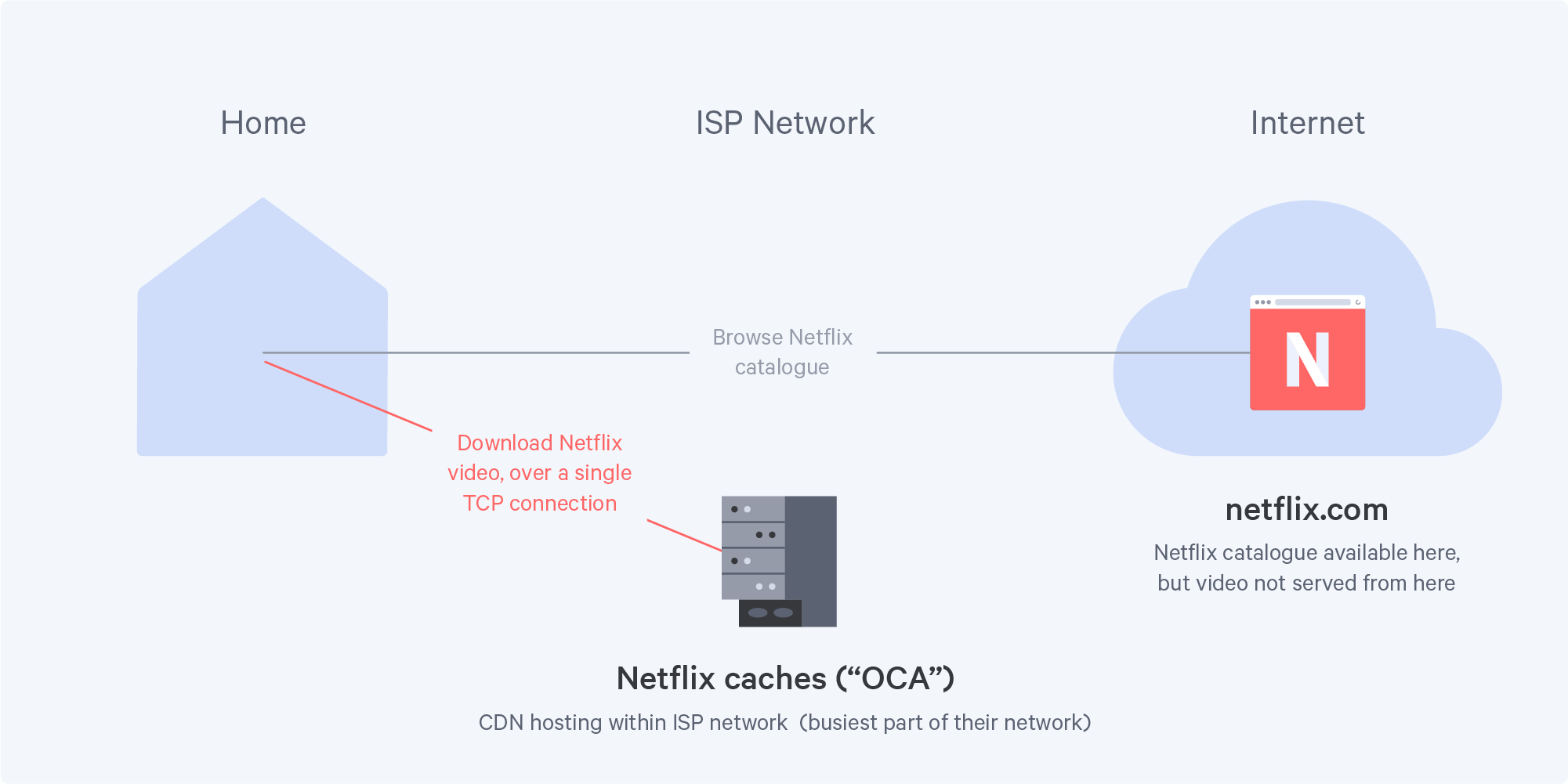 With all this going on, it’s perhaps surprising that more customers aren’t suffering from stuttering Netflix streams. But, as the two bewildered customers we mentioned at the top of the article exemplify, it seems this chokehold on Netflix download speeds isn’t being felt by the majority of viewers – and that’s in no small part down to Netflix’s ability to stream even 4K content with only very limited bandwidth.

To be clear, this isn’t entirely motivated by concerns over the performance of ISPs – although Netflix does publish its own ISP Speed Index, which ranks the performance of broadband providers in many of the countries in which it operates. 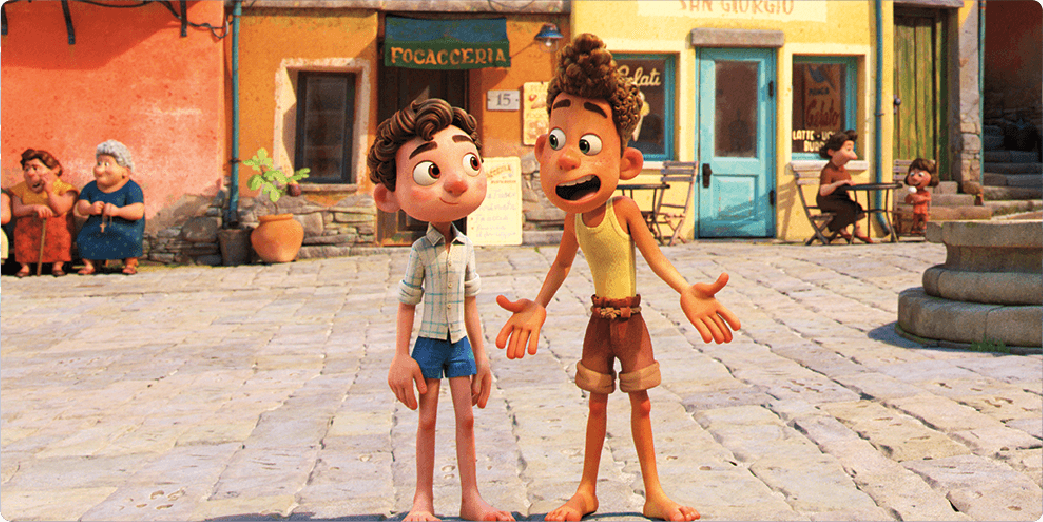 Animated films are easier for Netflix to compress

Netflix can now optimise the amount of data required to stream 4K content for each individual show, or even each scene

Netflix uses ingenious methods to limit the amount of data Ultra HD streams require, but without sacrificing picture quality. In fact, Netflix can now optimise the amount of data required to stream 4K content for each individual show, and even each shot (or scene) within that show.

Previously, each title in Netflix’s catalogue would be on a “fixed- bitrate ladder”, irrespective of the show’s content. So, for example, if you wanted to watch a show at Full HD resolution (1,920 x 1,080 pixels), it required a bitrate of around 5 Mbps; to stream a show in Ultra HD (3,840 x 2,160), you’d need 16 Mbps. As we can see from the graphs above, many broadband customers would struggle to get 16 Mbps from their broadband provider when watching Netflix, putting Ultra HD content out of bounds.

Now, the bitrate required has been greatly reduced, especially for certain types of content. In a sitcom with only a few fast- moving scenes, the average bitrate needed for Ultra HD drops from 16 Mbps to around 6.5 Mbps. For some animated content that’s easier to optimise, the 4K bitrate drops to as little as 1.8 Mbps – although Netflix stresses such efficient optimisation is the exception, rather than the rule.

Overall, Netflix says that optimising content in this way has cut in half the bandwidth required to deliver Ultra HD content. The real-world impact is that most streaming sessions deliver higher quality video, according to Netflix, with customers on low-bandwidth connections who might previously have been limited to standard definition video, now at least getting Full HD (if their viewing device supports it).

The number of rebuffers – those irritating interruptions where the video pauses so it can catch up – have also dropped significantly, by 65%.

Which brings us back to where we started. It’s perfectly possible that the customer suffering from poor Netflix download speeds
has never noticed the problem, because Netflix has massively reduced the amount of bandwidth it needs. Had Netflix not optimised its entire video library, that customer may have been putting his fist through the TV, wondering why Netflix was stopping to buffer every five minutes.

By relying on regular internet speed tests, and with the deft work of the streaming companies, it’s possible that millions of customers are living in ignorant bliss of the problems on their connection. The broadband reality gap is real, even if many affected consumers aren’t seeing it.

1.8 Mbps, the minimum bandwidth at which Netflix can now stream 4K video